A flight to Turkey from Ben Gurion Airport was delayed on Friday and 10 passengers had been eliminated after vacationers obtained pictures of aircraft crashes and threatening messages on their Apple gadgets.

One of many pictures despatched to passengers on the Pegasus Airways flight was a picture of the 2009 Hudson River aircraft crash in New York, and was captioned, “I want all of us will die,” in Arabic, in accordance with photographs supplied by the Israel Airports Authority (IAA).

“The suspect and one other 9 vacationers had been faraway from the flight per the request of the airline firm and the police,” the IAA spokesperson stated in an announcement.

“The passengers had been taken in for questioning at Ben Gurion Airport,” the IAA added.

“Individuals had been in a panic after they noticed the pictures of the crashed aircraft and had been very frightened. We turned to the flight attendants and so they took care of it,” Channel 12 quoted a passenger telling police.

By signing up, you comply with the phrases

The pictures had been disseminated through Apple’s AirDrop service, which allows file-sharing on gadgets in shut proximity. 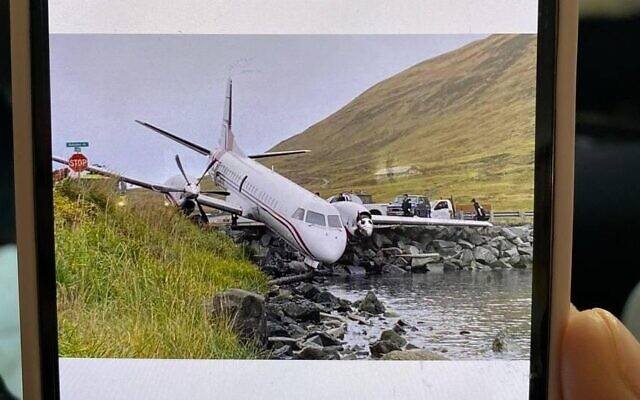 A picture of a aircraft crash despatched to passengers onboard a Tel Aviv flight to Istanbul on January 13, 2023. (Israel Airports Authority)

In the same incident in November, a Pegasus Air flight to Turkey from Ben Gurion Airport was delayed after passengers obtained threatening movies on their cell telephones. One passenger was detained in connection to the affair.

In Could, a flight was delayed after a number of passengers discovered pictures of aircraft crashes had been despatched to their cell telephones. Numerous passengers had been later arrested.

Occasions of Israel workers contributed to this report.


You are a devoted reader

That’s why we began the Occasions of Israel ten years in the past – to supply discerning readers such as you with must-read protection of Israel and the Jewish world.

Thanks,
David Horovitz, Founding Editor of The Occasions of Israel


Be a part of Our Group


Be a part of Our Group

Already a member? Check in to cease seeing this